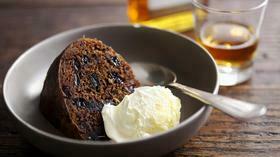 Thanks to BBC Food for the recipe and the photograph.

1.       Sift the flour, bicarbonate of soda, spices and salt into a bowl and stir in the sugar, suet, dried fruits, and the grated carrot or apple.

2.       Mix the black treacle with the egg and some of the buttermilk/sour milk and mix into the dry ingredients to give a soft mixture with a cake-like dropping consistency.

3.       Dip a large piece of muslin, an old pillowcase, a pudding cloth or a clean tea towel into boiling water, remove it and squeeze out the excess water. Lay it out on a surface and sprinkle a 30cm/12in circle in the centre with the 25g/1oz of flour and the 1 tbsp of caster sugar. Spoon pudding mixture on top and tie securely with string, leaving a little room for the pudding to expand.

4.       Rest a large heatproof trivet or container in the base of a large pan so that the pudding is not in direct contact with the heat. Place the pudding on the trivet/container, knotted side up. Pour in enough water almost to cover the pudding, cover with a tight-fitting lid and simmer gently for 3-4 hours. Take a peek every now and then and then to check the water level and top it up if necessary.

6.       Serve in chunky wedges with scoops of clotted cream and perhaps a small glass of whisky. (OR – custard and a cuppa will do!)