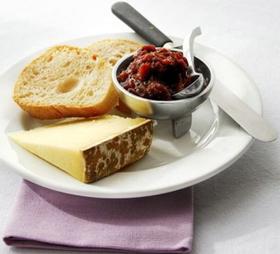 We longingly await the first “fruit” of Spring don’t we? Botanically speaking, rhubarb is a vegetable – a stem which makes it so. Nonetheless, with a little sweetening, it can be made into a variety of delicious desserts, chutneys, jams and even cakes.

Rhubarb needs a little care in preparation. The leaves are poisonous to human beings – although not to slugs apparently! Oxalates are in many vegetables – particularly some of the leafy ones such as rhubarb, spinach, chard, but also legumes and many fruits, nuts and soya. Oxalates are naturally occurring molecules, which when eaten can bind with calcium and prevent its absorption. As with most things – it’s the amount, preparation and frequency that will make all the difference.

1. Put the onions in a large pan with the ginger and vinegar. Bring to the boil, then simmer for 10 mins. Add the rest of the ingredients, except the rhubarb, plus 2 tsp salt to the pan and bring to the boil, stirring. Simmer, uncovered, for about 10 mins until the apples are tender.

2. Stir in the rhubarb and cook, uncovered, until the chutney is thick and jammy, about 15-20 mins. Leave the chutney to sit for about 10-15 mins, then spoon into warm, clean jars, and seal. Label the jars when cool. Keep for at least a month before eating.