Why is organic so good? 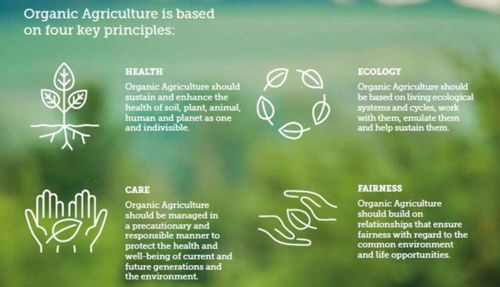 The information in this article was compiled from resources provided by the Soil Association.

Most people would agree that organic products are in many ways ‘better’ than conventionally produced foods. Indeed, organic systems have huge potential when it comes to mitigating the worst impacts of climate change and halting biodiversity loss. Yet there are still many misconceptions and fake news about what ‘organic’ really means. We want to provide clarity and bust some common myths about organic foods to help our customers make informed decisions.

What exactly is organic agriculture?

‘Organic agriculture is a holistic production management system which promotes and enhances agro-ecosystem health, including biodiversity, biological cycles, and soil biological activity. It emphasises the use of management practices in preference to the use of off-farm inputs, taking into account that regional conditions require locally adapted systems. This is accomplished by using, where possible, agronomic, biological, and mechanical methods, as opposed to using synthetic materials, to fulfil any specific function within the system.’ (FAO/WHO Codex Alimentarius Commission, 1999).

What are the benefits of organic agriculture?

Better for the planet

Organic agriculture takes a ‘whole system’ approach to farming and food production. This means farming in a way that aims to support our whole food system, from soils and farm animals to the health of people, nature and the planet. Organic farmers are encouraged to ‘close the loop’ on their farms, making use of what’s to hand and limiting the use of imported resources. It’s this respect for the natural world and ability to work with natural relationships and cycles that makes organic farming a solution that is better for the planet.

Organic farming is based on nourishing the soil. Keeping soils fertile and preventing soil erosion is a challenge for all farmers. Instead of using artificial fertilisers, organic farmers look after their soils using manure, compost, ‘cover crops’ and crop rotations. Around the world, we are losing soil much faster than it is formed, alarmingly between 10 and 40 times faster. One UN official stated that we may have fewer than 60 harvests left. As 95% of our food production relies on soil, it has never been more crucial to farm in a way that protects and preserves the soil.

Animal welfare is one of the most important aspects of organic farming. Organic standards insist that animals are given plenty of space and fresh air, and that they are raised in conditions that suit their natural behaviour. Smaller flocks and herds, and more access to the outdoors means organic animals don’t have to be routinely treated with antibiotics and wormers. Mutilations like beak-trimming to prevent the aggressive side effects of stress are also not needed or allowed.

Knowing what’s in your food

For a food product to be labelled as organic, every organisation working up and down its supply chain – from farmers and packers to food processors – must meet organic standards. This prohibits the use of pesticides, artificial fertilisers and genetically modified organisms. We must mention here that although organic farming affects the quality of food, science has not been able to provide evidence for significant nutritional differences.

Many critics of organic say that the reduced yields on organic farms mean they just wouldn’t be able to feed the world. There is some truth to this claim, as organic systems operating without synthetic nitrogen fertilisers and pesticides can sometimes experience lower yields. Whilst high yields are of course a goal for all farmers, it’s so important to recognise that yield alone is not the only factor posing a risk to global food security, especially in the face of a changing climate, growing pesticide resistance, and the critical decline in pollinating insects. Further, with 1 billion people on our planet malnourished, 2 billion overweight or obese, and a third of the food we produce never making it to our plate, it’s clear that the issues of our food system extend beyond yields into distribution, diet, availability and waste.

Organic food isn’t always more expensive, but for many of us, the higher price tag that comes with some organic food, drink, beauty and textiles products can be a barrier or concern. However, in the meantime, it’s important to recognise the reasons why organic food is currently often more expensive:

– Because it takes a lot of time, effort and care. Organic farmers play a vital role as environmental stewards, and the price tag can sometimes reflect the increased time, effort and expertise that goes into working with nature to produce organic food.

– Because it is certified. An organic symbol on a product means that it has been legally certified organic, meeting strict standards set under EU law. Organic certification bodies charge a certification fee to fund rigorous annual inspections, develop forward-thinking standards covering everything from animal welfare to pesticide alternatives, and offer technical support to certified licensees about how best to comply with these standards.

– Because it is better for the animals. Animals raised organically enjoy the very highest welfare standards of farmed animals, which is reflected in the price of organic meat and dairy products.

– Because it is better for the environment. Prices for organic food reflect the true environmental costs of production instead of hiding them in our taxes and water bills. The money spent to compensate for negative side-effects of non-organic production could be invested in restoration projects and climate change mitigation.

3. Organic is unscientific – it’s only for hippies!

Whilst organic agriculture is a return to more traditional forms of farming in many ways, this doesn’t mean it’s old fashioned. Tasked with feeding a rapidly growing population in the face of a changing climate, farmers and food businesses are arguably facing greater challenges than ever before. Navigating these challenges to produce food in a way that works with nature and remains sustainable for generations to come will require unprecedented innovation and co-operation, much of which must be led by the food and farming industry.

4. Organic isn’t as good for the environment as going vegan

If we’re to avert the worst consequences of climate change, we need a radical shift in both production and consumption of food. We urgently need to eat less meat overall but must not forget that livestock in particular plays an important role in sustainable and organic farming systems. They are a crucial element in crop rotation, recycling nutrients, adding organic matter to the soil and increasing soil fertility. Thus, if you’re looking for ways to reduce your impact on the environment through dietary change, it’s important to take a holistic view of the food that you’re eating, considering not just what you’re eating, but how it’s been grown and where it comes from.

If you have questions or want to learn more about organics, please visit us at the True Food shop in Emmer Green. We’re looking forward to chatting with you!