Leftovers, Soup and Beans – with vegan options for Veganuary 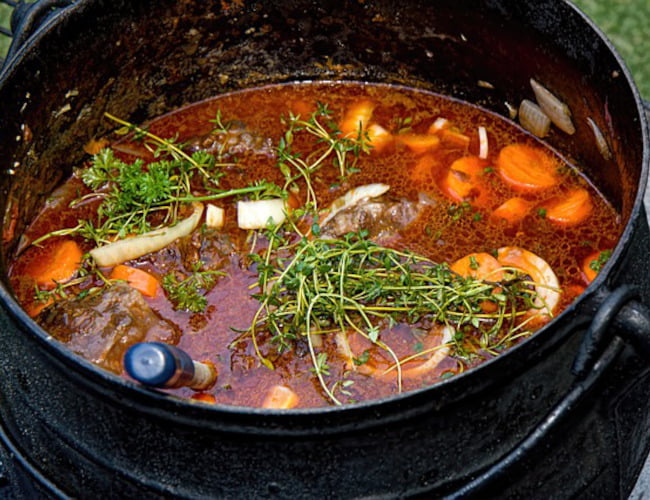 By Diana Earnshaw, with vegan adaptions by Penny Wenham

It may be a little late for leftovers but if you are like me, you still have them because you froze them all to deal with later. I think I had one of the turkey legs still in the freezer in October, from Christmas 2018! Bits of leftover ham – freeze them or add them to an omelette. If you don’t want to freeze leftover cooked vegetables, add them to homemade stock and puree for soup or add them to a vegetable stew; Christmas pudding – slice and fry in butter for a scrumptious snack or (like me!) breakfast! Leftover cream – add to soups/hot chocolate or beat with eggs for scrambled eggs or an omelette.

It really doesn’t matter if there are leftovers and you can still make a delicious meal from scratch with what you have saved. Leftover veg are really useful – have a go at the soups! January can be a bit of a bleak month – in many ways. Resolve to do the best you can with what’s available and what you have in the freezer and food cupboard. A can of beans can be the basis of lots of meals – whether or not you are adding meat of some sort.

With Veganuary in full swing we also thought now would be an ideal time to adapt Diana’s excellent recipes for January for anyone wanting to reduce their meat and dairy intake or new vegans, to show how easy it can be and how some of the products we sell at True Food can be used to do this. We hope these recipe variations show that it can be quite simple to veganize recipes, so family favourites or new recipes can often be adapted to be meat and dairy free. Happy Veganuary!

Curried ‘no turkey’ soup: Established vegans are unlikely to have leftover turkey in the freezer, but that said, if you’re new to veganism or just trying to reduce your meat and dairy intake, you might still have some knocking around. It’s a personal choice when starting to go plant-based whether you consume all the meat and dairy you have first or find an alternative home for it, but ideally you won’t just chuck it away without making good use of it. If you’ve been vegan for a while though then leftover meats at Christmas aren’t likely, but you might have more vegetables in January than you had planned. Not many vegetables make it to my freezer in their raw state – I’m much more likely to make a big batch of soup and freeze that, so I have something I can defrost overnight for lunch the following day when time is a bit tight.

Homity Soup: All the flavours of the 1970s Homity Pie that was so popular at the time. If you have some leftover cooked potatoes you can add them before pureeing. If you don’t have 300g of cooked potato, just use what you have and make up the weight with raw potato.

Homity soup – vegan: I’m using nutritional yeast here to bring a cheesy taste to it without using a dairy cheese. I’ve suggested an optional topping of grated cheese alternative but I’d urge caution to anyone new to giving up dairy cheese. Alternatives are getting closer in taste all the time, but they’re not identical and I’d recommend giving your taste buds a good few months without dairy cheese before trying a vegan cheese so the difference is less noticeable to your palate.

Mixed bean rarebit: The baked beans are needed for this recipe, but feel free to use other canned beans in place of the kidney and butter beans.

Mixed bean rarebit – vegan: In Diana’s original recipe she uses bacon slices, cheddar and parmesan and bakes it in the oven. Here I’m using smoked paprika as a nod to the bacon flavour, and alternative cheese options, and browning under a grill on top of the jacket potato or toast.

Mixed bean and butternut chilli: this is the simplest to veganize! Using a vegan Worcester sauce instead of a brand that contains animal products (this is most commonly anchovies) means this important element doesn’t need to be omitted to cater for vegetarians or vegans.